Kingston Park Warmblood Stud uses only the best stallions available, nationally and internationally, to put to our mares. These stallions are selected by researching pedigrees, performance, conformation and temperament. We pride ourselves on ensuring that the stallions selected and their progeny have been assessed by our professional peers, who have been able to conduct valuable research and visits to the various studs, to enable a full evaluation of the prospective stallion's attributes.


"Heaven Dancer" is a stunning young Stallion who has huge talent for Dressage. He is in Europe doing extremely well in Dressage as a young horse, and we have high hopes for his ongoing career. 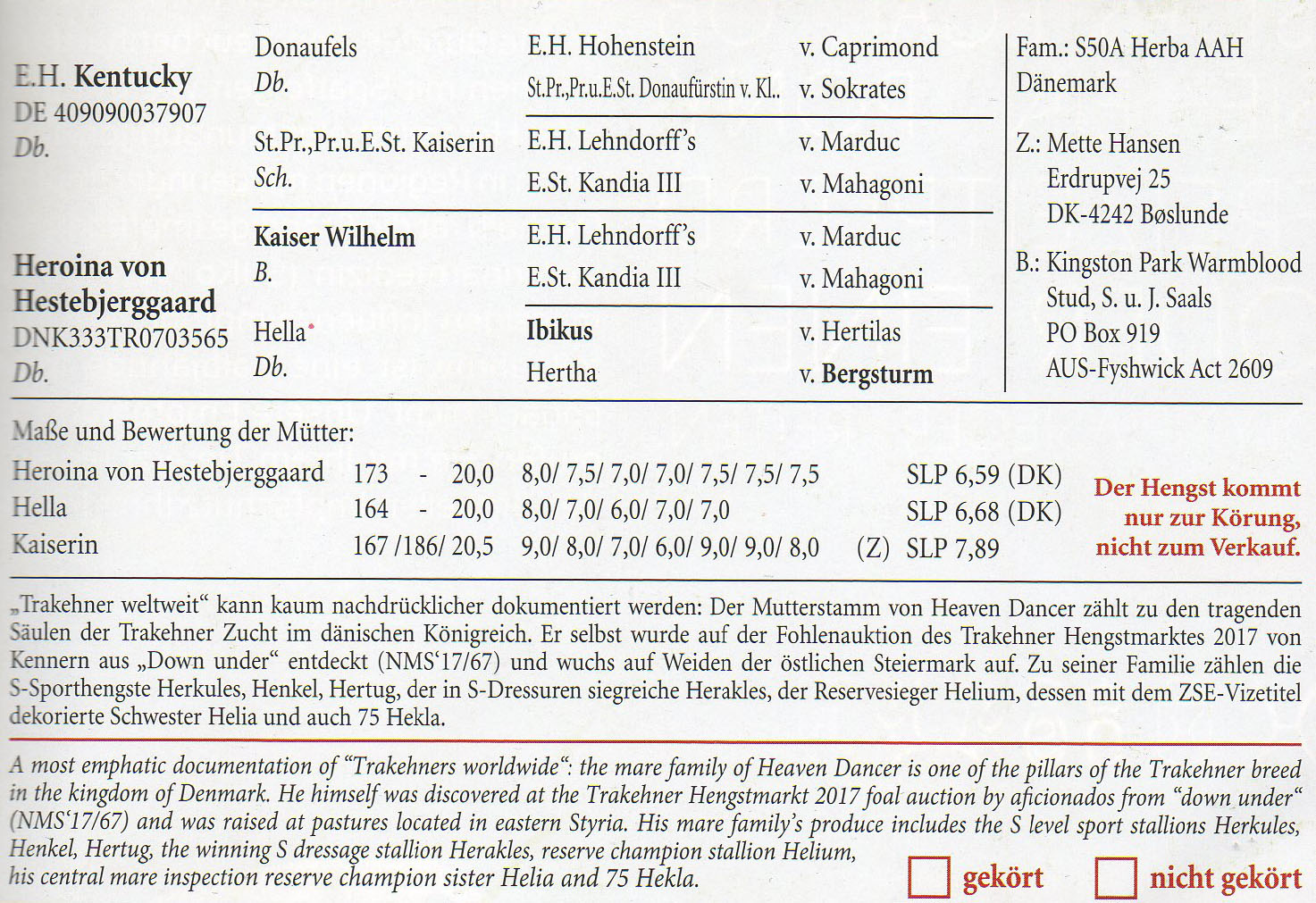 His pedigree is outstanding and follows the true pedigrees for Olympic Dressage brilliance.

Sire: VIVALDI – AWHA wid Trakehner Warmblood Stallion. Advanced level dressage and supreme show champion. He carried the famous Sandor and Traum Trakehner bloodlines which are so sought after in modern Trakehner breeding. Vivaldi was a Trakehner Warmblood stallion by Valuta – imported from Denmark. His bloodlines can be directly traced to the greatest Polish Trakehner studs of ‘Liski’ and ‘Kadyny’. He is a direct decendant of the famous Trakehner stallion Traum born in 1939 in East Prussia. Vivaldi had exceptional conformation as well as extravagant movement – large, free flowing, lots of knee action with a clear moment of suspension.

Noble Monarch has it all: Looks, Temperament, Movement, Athleticism and Performance. Noble Monarch is a truly elegant stallion with the stamp of his pure Trakehner Breeding highlighted in his every performance. His pedigree is outstanding, from the oldest 'elite' Trakehner bloodlines in Europe. Noble Monarch was campaigned by Daniella Dierks (Grand Prix rider) successfully to FEI Inter1.

Noble Monarch was training at Grand Prix in 2014, but under the ‘EA Mandatory Hendra Vaccination 2014 By-Law’ was forced to be injected with this vaccine to compete. Unfortunately he suffered a very severe Adverse Reaction to the first dose, and has not been able to continue his FEI career.

Noble Monarch has successfully competed and won at the Trakehners Australia National Tours of 2013, 2014, 2015, 2016, 2017, and 2018. He remains a beautiful horse, with lovely floating movements, a wonderful temperament which he throws to all his progeny.

We have a foal "Arabesque" by Amadea from Herzensdieb (image courtesy Elite Frozen Foals, used with permission).