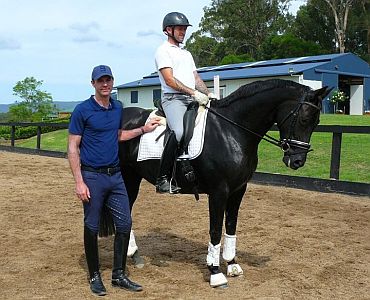 HerzAss W has achieved German Trakehner Verband ‘Premium State Mare of Germany, Studbook One’ status whilst in Australia, after her importation at 8 months of age as a ‘Trakehner Verband Premium Registered Foal, Germany’.

She has continued her career in Australia under the care and training of Mr. Brett Peel (Australia) and Mr. Stefan Wolfe (Germany) and has shown she has a wonderful talent for Dressage. 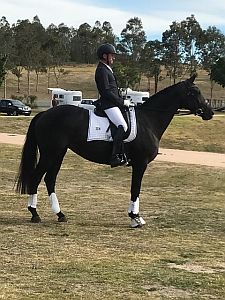 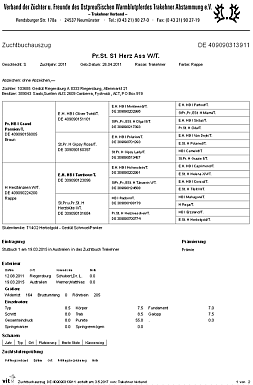 HerzAss W registered with the Trakehner Verband Germany – Premium Trakehner filly, has been imported from ‘Gestut Riegersburg’ Austria, to Australia by Suellen and John Saals of ‘Kingston Park Warmblood Stud’.

One of the few daughters of Superior Champion Trakehner Stallion, Grand Passion: Germany, who is based in France, and the Dam Herztanzerin W registered Premium Trakehner Mare: Austria, HerzAss W is a beautiful representative of her high profile parents. This breeding line is of the ‘Hessian House Foundation Panker Stud – Germany,’ whose Trakehner bloodlines date back to the original ‘Main Stud Trakehnen’.

Grand Passion, champion of the 2007 Trakehner approvals is of a supremely athletic type. Of noble blood, he presents a fascinating appearance: powerful gaits, excellent hindquarters, an impressive walk and a hard to find temperament.

Grand Passion’s Dam Gypsy Rose is a full sister to the National and World Champion of Young Event Horses Grafenstolz, who is constantly victorious in the international eventing scene. Gypsy Rose was awarded the title “Best three year old” in Rhineland and was Reserve National Champion 2000. Her sire Polarion was successful at Grand Prix Dressage, and competed in World Cup Qualifiers with Markus Gribbe, as well as the European Junior Dressage Championships with Laura Bechtolsheimer.

Grand Passion descends from the highly successful Trakehner mare line of the Gundula/Poll-Horem, amongst whose progeny is the State owned stallion Gipsy King. Grand Passion’s great grand dam Grazie was announced the top mare on more than one account, and twice, took part in the German National Young Horse Championships.

Grand Passion’s Sire - Premium Stallion Oliver Twist was the first selected Trakehner stallion out of the winning stallion Monteverdi, both from the Heinen-Issum Stud. His selection and distinction as prime stallion proved to be the result of a finely planned mating. Oliver Twist’s Sire is the famous E.H. Monteverdi – E.H. Partout – E.H. Arogno - a class in themselves! Monteverdi was the Champion Stallion of 1998, and qualified and participated at Bundeschampionat, FEI World Chammpionships for Young Dressage Horses and Nurnberg Burgpokal, and has wins and placings at International Grand Prix Dressage. He is listed amongst the Top 1% of all dressage sires in Germany, all breeds, with an index of 156 points (2010). Monteverdi’s sire E.H. Partout was a leading Grand Prix Dressage stallion on the International Dressage circuit with Dutch rider Anky van Grunsven. E.H. Monteverdi’s mare family is that of O49A Mira, a line that has also produced the very popular E.H. Michelangelo – the most striking point about the pedigree is certainly the combination of Arogno blood with Donauwind via his black son Matador. This also produced the important E.H. Hohenstein. Oliver Twist’s Dam E.S. Olga III by E.H. Sixtus – Habicht – Burnus compliments the Oka family’s high class breeding. 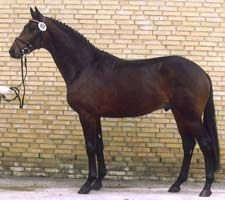 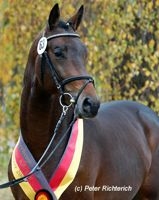 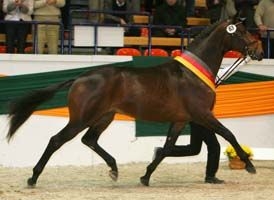 2007 was another year where it was very hard to pick a champion from the beginning - a group of colts showed tremendous quality, but among these 5-6, who to pick? At least that keeps the excitement going! In the end, it was the Heinen family's lovely Grand Passion (by Oliver Twist o/o SPS Gipsy Rose by Polarion) who was proclaimed as the new Trakehner Champion stallion, and rightly so. The stallion showed excellent type and great overall harmony with an especially note worthy shoulder and croup formation.

Grand Passion is bred out of the full sister to the CCI*** eventer Grafenstolz TSF, and through his sire, carries two more international Grand Prix dressage winners (EH Monteverdi TSF and EH Partout) as well as the excellent jumper blood of Habicht via Sixtus. As is typical for his sire line, Grand Passion had exceptional elasticity and impulsion and even though he grew tired over the days, always carried himself well and like a true champion. 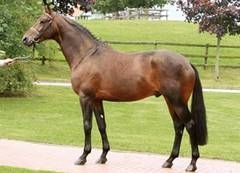 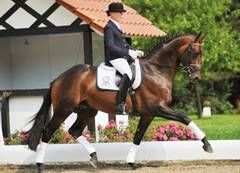 From the 22 - 25 September 2011 in Saumurs, the home of the famous "Le Cadre Noir", the French Dressage Championships, in the six year old dressage horse class - the P.S.I. stallion Grand Passion celebrated a big victory and won the gold medal in his class.

Oliver Twist was a premium stallion in NMS and is presenting his first crop of sons. He is a maternal half brother to the 2006 premium stallion Okavango, and the excellent mares O'Hara and Orissa, both in hand and under saddle champions. His second dam Oda is a full sister to the ATA's accomplished Onassis and thus comes from the same mare line as the CIC*** eventer Oktavio (approved in Germany). EH Monteverdi TSF was the champion in NMS, participated at the Bundeschampionat and the FEI World Championships for young dressage horses, qualified for the Nünrberg Burgpokal and won internationally at Grand Prix dressage. Monteverdi's sire EH Partout had a stellar international career with Dutch Anky van Grunsven and then retired to stud duties. He has several approved sons like the FEI stallions Halbgott (now competing in Florida with Marco Bernal), and Maserati (now competing in Belgium) as well as the versatile Goodwood, the dressage stallion Sarasani and others. Equally potent in the Dutch breed, he has several highly accomplished offspring competing in the Netherlands. His daughter Exquis Nadine represented the Netherlands at the 2007 European Dressage Championships in Turino, Italy, winning a Team Gold medal with rider Hand Peter Minderhoud.

Gipsy Rose is a full sister to the truly outstanding Trakehner stallion Grafenstolz TSF. To sum up his amazing career so far: premium in NMS, the first horse in history to qualify for all three disciplines at the Bundeschampionat, winning the eventing part with the highest score to this day, winner of the FEI World Championships for young event horses in Lion d'Angers in France, and at the age of only 8 years, placed at CCI*** level. And all of that with an active breeding career "on the side". His sire Polarion TSF had an international career in dressage for Great Britain, and EH Van Dyke was also a Grand Prix competitor, for Germany. This is the dam line of Guy Laroche (ATA), Guter Stern, Guter Planet and a number of exceptional brood mares. 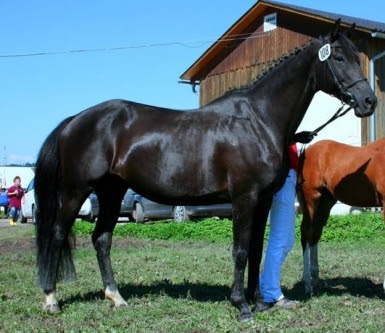 Herztanzerin W (pictured right) is listed in Germany and Austria in the Leistungsstutbuch D, and in Germany and Austria in the Hauptstutbuch. She is listed in the Trakehner Studbook Austria, as Premium Quality. Herztanzerin W has an outstanding dressage pedigree. Her Sire Tambour and his Sire Hohenstein are clearly stamped in her, resulting in excellent hindquarters, long lines, very good gaits with desired knee action. The influence of her Dam’s sire Consul comes to fruition, with all his descendants having very good toplines. Herztanzerin W is clearly High, Noble and Clear in breed type, Balanced and Harmonious in gait – Herztanzerin W is an excellent example also of the ‘Hessian House Foundation Panker Stud H-line’, where the horses having “Herz (heart)” beginning their name, are true to type and have excellent rideability.

Herztanzerin W‘s sire, the Elite Stallion Tambour, descends from Trakehnen’s Tapete family through the great Totilas' daughter Tip-Top. His grand dam, Elite Mare Tilsit III by Herzbube, produced three approved stallions – all becoming Elite Sires. His dam Premium and State Premium Mare Tanzerin by Consul, was the best three year old at her inspection in 1991, overall Champion at the State Mare Show Schleswig-Holstein 1994 in Bad Segeberg, as well as Reserve Champion six year old mare during the National Mare Show 1994 in Warendorf. During her career as a broodmare, she produced three approved stallions. Tambour’s sire Hohenstein also carries the title Elite Sire, as does his sire, Caprimond and Tambour’s Dam’s sire, Consul. Hohenstein’s sire Elite Stallion Caprimond, has achieved a special position within and outside the Trakehner breed, by his prepotency to sire dressage talent. 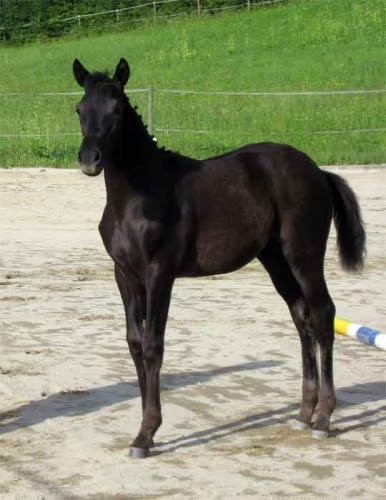 Pictured right is HerzAss W (Ace of Hearts) at four months of age.

For more information on Trakehners visit:

For more information on Grand Passion:

For more information on Herztanzerin W 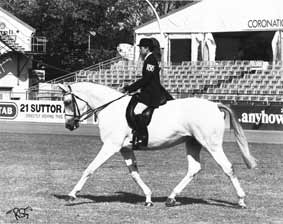 Amadea has an exceptional pedigree. Her Trakehner bloodlines are the most sought after, and can be traced back hundreds of years.

On her sire’s maternal line, Amadea is a direct descendant of the famous Handschelle 685 mare line, which has remained one of the most valuable in Trakehner breeding in Germany right up to today. Amadea also carries the famous sire lines of Tempelhuter, Perfectionist XX, Pythagoras, Jagdheld, Polarstern, Altan, Hirtensang, Burnus and Habicht bloodlines. All of these stallions have not only been outstanding performance horses, but have been the foundation sires of the modern Trakehner horse. It is therefore an acclamation to Amadea’s sire Domhardt, who carried these amazing bloodlines which are so sought after today by Trakehner breeders.

Amadea is also a direct descendant of the famous thoroughbred racing bloodlines of St Simon (GB) 1881 and Phalaris (GB) 1913 on her dam’s mothers’ line. These lines have been used by the Trakehner Verband in their breeding history for over 100 years. In summary, Amadea’s thoroughbred bloodlines are extremely impressive and can be traced for hundreds of years.

Amadea is the dam of Czar Australis, Trakehner stallion by Zwion. Czar Australis competed successfully at dressage, reaching Grand Prix before his export to Japan.

Amadea is also the dam of the young stallion Noble Monarch. This Trakehner stallion is by Vivaldi. Noble Monarch is extremely elegant and noble, with extravagant movement and a beautiful temperament. He is currently competing successfully at dressage and looks like making a name for himself in this discipline.

Noble Monarch is currently trained in dressage to medium level. He is currently campaigned by Sue Walker of Young, NSW (Trakehners Australia). 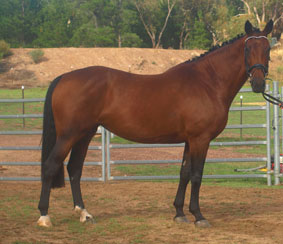 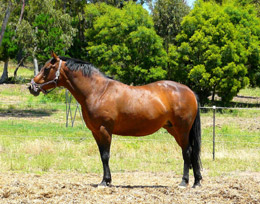 Laurellie is a beautiful Holsteiner mare who has been selectively line-bred. She has two crosses of Farnese. She has the classical strong foundation, strong muscles, excellent chest and neck, compact and strong top-line. Her trot and canter are expressive and elevated. Looking at photo evidence, she very strongly resembles the famous Farnese, having the same powerful build and movement. Laurellie passes onto her foals her famous bloodlines and excellent strong conformation.

On her papers from the Verband der Zuchter des Holsteiner Pferdes, Farnese is noted as the most outstanding Holsteiner stallion in Germany, with an extremely extravagant trot ‘Par Excellent’. Farnese carried the famous Achill-line, one of the best pedigree lines in Holsteiner breeding. Not only was Farnese one of the top Three-Day Event horses in Germany, but he proved himself to be a great sire, passing on his exceptional genes to his progeny.